Shamanism in the Age of Reason : Chapter 03

The practice of spiritual shamanism and healing is a subject that has been covered by many texts, so here we will examine physical models of shamanic therapy only as they apply directly to Psychedelic Information Theory (PIT). According to PIT, hallucination is the spontaneous production of nonlinear information via destabilization of multisensory perception.1 Similarly, shamanic therapy is the production of spontaneous cellular organization via destabilization of metabolic homeostasis. An M.D. may prescribe a specific therapy to treat a specific symptom or pathology; a shaman will look beyond the pathology and prescribe radical dieting and psychedelic drug therapy to fully reboot, re-tune, and recycle the patients entire metabolic process. Shamanic therapy can be considered a nonlinear or holistic approach to diagnosis and healing.

In modern clinical therapy psychedelics are employed to improve psychological resilience in the face of stress or trauma, typically in the case of depression, PTSD, and anxiety. Psychedelics are thought to produce psychological resilience through the spontaneous creation of autobiographical insights and transpersonal spiritual epiphanies which compress existing memories into a new holistic identity. According to PIT the generation of salient insights in psychedelic trance is the byproduct of nonlinear information creation and memory compression, just as dreaming is a form of associative information creation and compression.2 Even a single low-dose psychedelic session can produce changes in identity and transpersonal awareness that last a lifetime.3,4,5 To apply this kind of therapy the shaman need do nothing more than provide the medicine and a warm quiet place for the subject to lie down. Psychological resilience is generated by allowing the subject to navigate anxieties, forgive and accept past behaviors, and sense a transpersonal awareness of unity and love flowing through all creation. This method works best in targeted therapy, and should only be applied in a controlled setting to reduce negative information spirals and negative plasticity.

Traditional shamanic therapy typically includes components of restrictive dieting, fasting, and purgation of bodily wastes and fluids.6 The common wisdom is that dieting and purgation cleanses and purifies the body, restoring it to harmony and balance. A more cynical analysis may conclude that radical dieting and fasting destabilizes the bodys metabolic homeostasis and puts it into deprived states of heightened alertness and stress, states which can easily produce psychosis if prolonged for a day or more. Subjective reports of psychedelic use often include an initial period of stomach pain and intestinal discomfort preceding full psychedelic destabilization; this is because the psychedelic must interrupt 5-HT receptors in the gut as well as the brain before metabolic homeostasis can be fully uncoupled and re-tuned. Techniques of dieting and fasting merely speed and amplify the overall destabilizing effect of psychedelics on global metabolic homeostasis.

The Control Interrupt Model of Psychedelic Action posits that hallucinogens produce complex perceptual results through pharmacological interference of multisensory frame stability.1 The same model applied to neural oscillators in a sensory network can be applied to cellular oscillators in an biological matrix. Many functions of metabolism and cellular signaling are modulated by 5-HT and dopamine, interrupting these signaling pathways will not only produce patterns of spontaneous neural organization, they will also produce patterns of spontaneous metabolic and cellular organization. For instance, 5-HT2A receptors and serotonin release have been shown to play a large role in mediating blood platelet aggregation.10 Hallucinogens target 5-HT2A receptors, and platelet aggregation is a fundamental immune mechanism. 5-HT2A activation has also been demonstrated to produce powerful anti-inflammatory effects in cardiovascular and soft tissues; and 5-HT2A agonists like LSD may produce potent anti-inflammatory effects against TNF-a (tumor necrosis factor alpha), an autoimmune regulator which has been indicated in atherosclerosis, rheumatoid arthritis, psoriasis, type II diabetes, depression, schizophrenia, and Alzheimer's disease.11

Because the 5-HT2A receptor is a G-coupled protein that promotes secondary transmission within the cell membrane, psychedelics that target the 5-HT2A receptor can influence a wide variety of intracellular functions. The signaling pathways mediated by the 5-HT2A receptor include the release of charged calcium ions (Ca2+) and the activation of PKC and MAPK, protein kinases which transfer that energy to proteins and enzymes that regulate cellular metabolism and proliferation. Coaxing cellular signaling pathways into patterns of spontaneous regeneration, anti-inflammatory, or autoimmune organization is at the root of all physical shamanic therapy. This model can be applied to neural inflammation, as in cluster headaches; emotional inflammation, as in PTSD; stress-related soft-tissue inflammation; or systemic inflammation related to chronic disease and auto-immune disorders.

Subjects under the influence of psychedelics sometimes report feelings of being cleansed from the inside, like each cell is being polished and organized, and that waste and cellular debris are being expelled. This sensation has been compared to a radical auto-immune response, like computerized maintenance routine for de-fragmenting and optimizing cellular memory structures. Just as neural assemblies may be coaxed into becoming spontaneous nonlinear feedback generators, cellular signaling pathways may be coaxed into generating information via spontaneous energetic metabolic pathway testing, strengthening, and regeneration. Just as nonlinear hallucination may facilitate memory potentiation in the same way as dreaming, nonlinear metabolic organization may facilitate cellular regeneration or immunological response similar to states of fever or deep restorative sleep. The cellular regenerative power of psychedelics have only recently been demonstrated in scientific terms, but in shamanic models this restorative function is taken for granted.

Physical shamanism employs wave-based entrainment techniques to coax spontaneous nonlinear organization of metabolic pathways and cellular signaling systems. Typical shamanic wave entrainment comes in the form of singing or music, but can also be applied through talk, touch, hypnotic motion, or other repetitive sensory feedback stimulation. Entraining a subject into a targeted state of information processing is the science of hypnosis or trance. The psychedelic medicine allows the patients homeostasis to become destabilized, and in this state the shaman becomes the circuit driver or resonator, the oscillator with the most power to amplify or dampen signal coupling strength within the entire circuit. Acting as a hypnotic entrainer, the shaman can place the patient into dream-like trance and then synchronize his own perception to the patients subtle internal body rhythms. The shaman uses the hallucinogenic interrupt as a control frequency for mediating contact with and manipulating the patients mind and metabolic process. Once the control frequency connection has been established through mutual ingestion of the psychedelic medicine, the shaman then uses specialized entrainment waves to coax new metabolic interference patterns and signaling pathways throughout the patients entire cellular matrix. 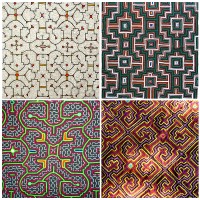 In Shipibo ayahuasca shamanism, the shaman takes the psychedelic medicine in order to visualize a flickering grid of patterns and symbols crawling across the surface of the patient. These ayahuasca patterns are embedded into Shipibo textiles, ceramics, tattoos, and all forms of tribal artwork, and are considered to be visual representations of the icaros sung during shamanic ceremony. (Fig. 1) Each Shipibo pattern corresponds to a sacred psychedelic space where a specific type of information is manipulated and revealed, and by tuning the fluctuation of these patterns through the patients biological systems the shaman can sense blocked signaling pathways, restore atrophied pathways, and bring harmony and balance to the entire organism. Subjects under the influence of ayahuasca and shamanic singing report the feeling of every cell in their body resonating in tune with the healing songs of the Maestro.7,8

The ayahuascero shaman may employ hands-on techniques to massage the patients embedded patterns into a more harmonic shape, sometimes even sucking or blowing psychic energy through the patient, or perhaps performing a psychic surgery to remove a dark body, a block, or a curse.9 Sometimes the shaman must dig very deep into muscle and organ tissue before the source of illness can be found; sometimes the patients energy pathways may be so blocked or degraded they are impossible to fix. The shaman may use high-pitched vocal tones to focus sound waves deep into the body, hoping to break apart blocked signal pathways via the power of resonant intonation. The shaman may use high pitched whining or whistling tones focused at one area of the body, or may use throat singing to invoke deep rumbling bass tones which make the patients chest cavity resonate at same frequency as the sound vibrations moving deep into the Earth.7 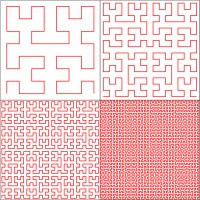 The case can be made that Shipibo textile patterns and sacred songs are compressed artifacts of nonlinear hallucination. These patterns are isomorphic of Peano space-filling fractal curves, S- or L-shaped patterns which repeat in embedded granularity depending on the depth of system iteration. (Fig. 2)12 Shipibo patterns correspond to specific tones and nonlinear states of consciousness, and icaros are cultural technologies for accessing specific states of highly organized nonlinear feedback complexity in both neural and cellular signaling pathways. By employing these techniques under the influence of psychedelics the shaman can entrain the biological function of the patient all the way down to the cellular level, perhaps even to the genetic level. Transitioning through these levels would depend on the granular complexity of the interference pattern created between the shamanic entrainment wave and the hallucinogenic interrupt.

[7] Charing HG, 'Communion with the Infinite: The visual music of the Shipibo people of the Amazon'. SH, Winter 2005

[9] Beyer, SV, 'Singing to the Plants: A Guide to Mestizo Shamanism in the Upper Amazon'. University of New Mexico Press (October 31, 2009)